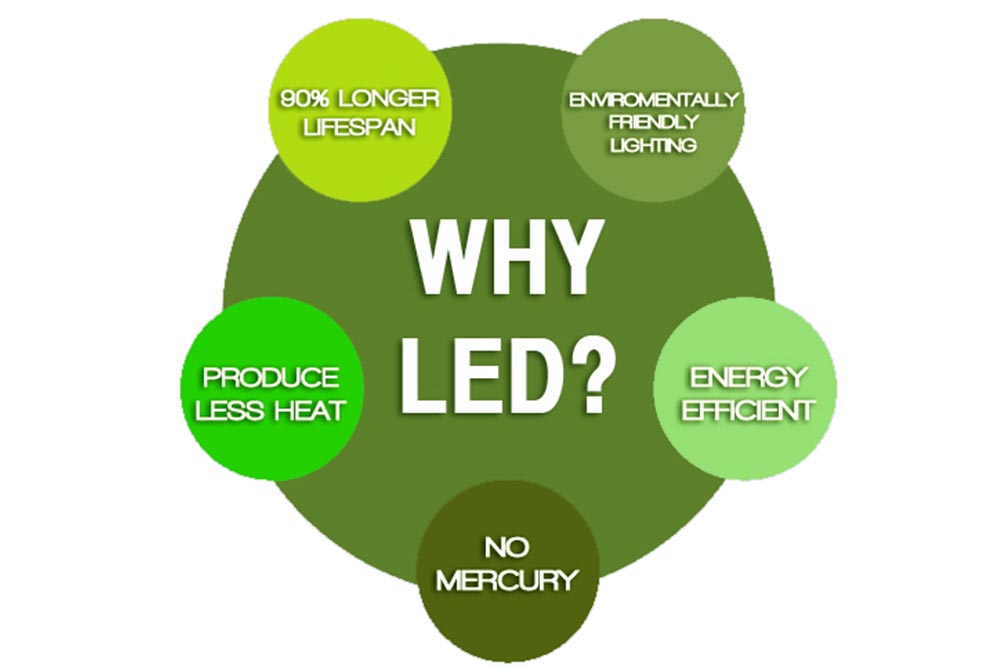 LEDs Low Environmental Impact
Reduced carbon footprint that contains no environmentally-harmful elements. Unlike CFL, LED contains no LEAD and MERCURY which eliminates special handling and disposal requirements from landfill and water to the benefit of all. LED uses not fragile filaments, no poisonous mercury, no high pressure gases, and is totally recyclable.

LED Technology Delivers Energy Savings through Super Efficiency UP to 80% less Energy Consumption=less impact on Global warming.LED is solid-state technology and does not rely on outdated “inefficient” technologies to create illumination

LED Efficiency Saves Money
Energy Saved is money earned for the consumer in the form of reduced electric bills. ROI for the consumer begains from the moment they switch on the LED product and is rapidly realised.

Traditional Bulb Replacement
LEDS are available in a wide varity of standard products engineered for direct replacement and retrofit. As easy to install as traditional bulbs that LED replaces.

LEDS Ultra Long-Life
LED Lifetimes are typically rated at 50,000 to 100,000 hours which depending on the application and usage can last up to 20 years.

LED Lighting Quality
The Flexibility of LED light in application, utility and available color temperatures and full spectrum light enables the broadest range of applications and commercial markets. LED bulbs turn on instantly and are available in dimmable and non-dimmable configurations. CFL falls short in that typically there are start delays, warm up times, and are not dimmable.

Incandescent bulb Government Ban
Governments globally are banning the incandescent bulbs and most bans are taking effect now and over the next two years. Governments support LED lighting as an alternative to high energy consumption which is evident in the current Economic stimulus package which includes LED as a featured technology for energy independence.